“Adapt or perish, now as ever, is nature’s inexorable imperative.”

H. G. Wells’ quote has wide-spread applicability beyond nature. Whether it’s an ocelot in Paraguay, a night landing on an aircraft carrier, or a business in Kansas, the key to survival in each case is operational agility and the ability to successfully adapt to a changing environment.

The observation that organizations must adapt to changing conditions is neither surprising, nor is it a new concept. The reason one organization thrives through its adaptability while another struggles to survive has been the subject of academic research as well as articles in the lay press. As one example, a discussion that touched on this phenomenon was presented in Clayton Christensen’s 1997 book, the “Innovators Dilemma.” Christensen suggested that companies that had achieved success by the development of an innovative new product often had challenges sustaining that success as the company grew. One factor was that the corporate culture that helped nurture the company’s innovation eroded as the company grew.

Growth is hard and sociopsychology may play just as important of a role in an adaptable organization as having efficient business processes or using Kanban principles as your product development framework.

Bill Gore, inventor of GORE-TEX, observed that once one of his factories employed more that 150 or so people, problems inevitably began to develop and productivity fell. He didn’t identify the reason, but quickly learned that it was better to build a second factory than to try to force the larger one to maintain its operational efficiency. It has been reported[1] that Gore believed that once a unit reaches a certain size, “we decided” becomes “they decided.”[2]

Former Netflix chief talent officer, Patty McCord, has also observed that things begin to change at companies once they approach 150 employees. McCord calls it the stand-on-a-chair number.[3] She maintains that it’s time to reevaluate your communication strategy if a leader stands on a chair to address the company and someone yells “We can’t hear you.”

In one section of his book, “Tipping Point,” Malcom Gladwell discussed Hutterite communities and wrote, “At 150, the Hutterites believe, something happens–something indefinable but very real–that somehow changes the nature of community overnight.”[4] Once a colony reached 125, it split to form two colonies. But, why 150?

In his 1992 paper, “Neocortex size as a constraint on group size in primates,” British anthropologist and evolutionary psychologist, Robin Dunbar, argues that the size of a primate’s neocortex establishes a sociopsychological limit on the number of close relationships that can be maintained. For humans, Dunbar set that number at 150.

The “magic” number of 150 may be related to the concept that relationships among individuals can be characterized in terms of the strength of their relationship. In a seminal publication in 1973, “The Strength of Weak Ties,”[5] author Mark Granovetter discussed interpersonal relationships in terms of strong ties, weak ties, and absent ties. In his paper Granovetter wrote, “Most intuitive notions of the “strength” of an interpersonal tie should be satisfied by the following definition: the strength of a tie is a (probably linear) combination of the amount of time, the emotional intensity, the intimacy (mutual confiding), and the reciprocal services which characterize the tie.”

By Sadi Carnot at English Wikipedia (Transferred from en.wikipedia to Commons.) [Public domain], via Wikimedia Commons

It may seem counterintuitive that a weak tie could be more important than a strong tie. To understand why that may be the case, it may be useful to visualize relationships. As an example, the following graph is a social network analysis of one set of Facebook relationships. [6] 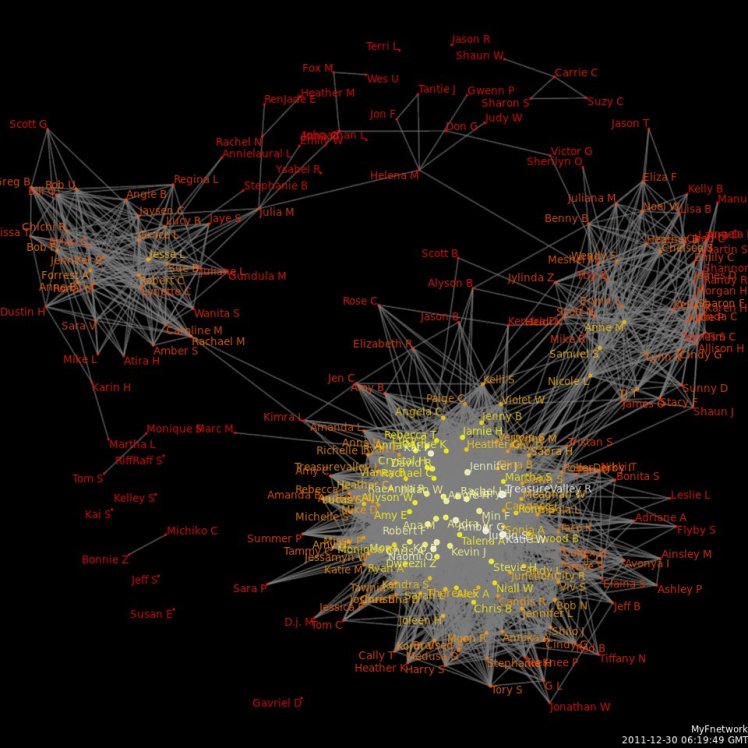 One interpretation of Granovetter’s work is that weak ties may be more valuable than strong ties because they represent conduits to possible new information or knowledge that does not exist within the strong tie cluster.

A present-day example could be the case of an individual seeking a new job. The thought is that most of the person’s close friends, the ones with strong ties, already know the person is seeking a job. Furthermore, all their likely job leads will be similar because of closed nature of their cluster. The hypothetical job seeker, might have better luck in finding a job by leveraging their weak ties. It could be one of those 500+ connections they have on LinkedIn may have an opportunity unknown within the cluster.

The strength of weak ties in the business world

If silos within a company are based on strong ties, then one strategy to increase information sharing is to recognize the strength of weak ties and develop a strategy that facilitates their development.

The yin and yang of managing information in the adaptive organization. 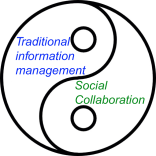 Organizations must have a two-part technology strategy to collaboration. The first part has been in existence for decades in the form of traditional information storage platforms and collaboration platforms. This category would include Enterprise Resource Planning (ERP) systems such as SAP, JD Edwards, or PeopleSoft and workflow platforms such as IBM Notes or SharePoint. These systems manage the critical data of the organization and to some extent provide collaboration features. However, the collaboration capabilities tend to be structured that is not conducive to supporting weak ties.

The second part of a successful collaboration strategy of to have a social collaboration platform that facilitates the development and exploitation of weak ties. There is a rapidly expanding number of technology options in this area such as IBM Social, Jive Software, and Slack – to name just a few. The last product on the list, Slack, provides an indication of the popularity of these new generation, social collaboration products. Slack was first launched in August 2013 and two and a half years later had an estimated value of $2.76 billion with over one million daily users. In March 2014, Slack’s daily users had reached 2.3 million and the company value was estimated to be over $4 billion.[7]

To be sure, social business collaboration does not replace traditional information management platforms. An organization needs both. Organizations that devote resources exclusively to improve the efficiency of traditional information management platforms without investing in social business collaboration will likely end up building better silos.

A successful, agile company may never attribute their success explicitly to creating an environment that facilitates the development of weak ties. Nonetheless, behind their success is undoubtedly a social network of employees that have the culture and tools to share information with anyone in the organization. Real-time sharing of information with peripherally known employees is an empowering process and one that ultimately leads to a sense of shared consciousness in the organization.

[2] The Future of Management – Page 94, https://hbr.org/product/future-of-management-hardcover/an/2505-HBK-ENG

[4] Page 181, Gladwell’s interview with Bill Gross, a leader of a Hutterite colony outside Spokane, Wa.