I embrace being different. Diversity of ideas, experiences, and perspectives is the foundation of great friendships, exceptional relationships, profitable businesses, and prosperous countries. However, the mere fact that someone is different from a group in some manner does not necessarily mean that person automatically has superior competency to address important, complex issues.

It seems to me that the loyal supporters of President Trump conflate being different with being competent. Their argument goes that Trump must be doing something great because so many Washington insiders disagree with him. Yes, President Trump is definitely different on many levels, but time will eventually show that those differences are more effective in achieving TV ratings and Twitter followers than accomplishing anything positive for America, or even his loyal supporters.

I have called Trump the Potemkin president because there is little intellectual substance behind his 140 character tweets. There is little substance to his executive orders. I can see little substance in anything he says. Well-reasoned substance no longer emanates from the Oval Office as it has with all previous presidents. In that regard, President Trump is truly different. 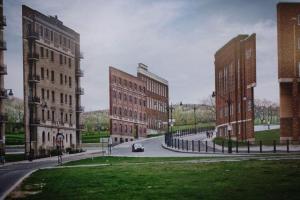 Maybe it’s his random birth into a life of privilege that feeds his self-delusion that he is more than one of  the facades in Potemkin. Or, as some have suggested, maybe he really does suffer from NPD – Narcissistic Personality Disorder.

Regardless of the cause, I don’t know which is worse- a person who actually believes he or she can excel in a job for which they have no experience, or the person who knows they are incompetent but doesn’t care. Neither personality trait is consistent with being president of the United States. Such actions may be more aligned with what I’ve observed in some CEOs of companies.

Sarbanes-Oxley notwithstanding, there is a small subset of CEOs that may have deluded themselves into thinking they have the luxury of insulating themselves from bothersome facts. The delusion includes believing that in the event of failure there is always a golden parachute and bankruptcy to protect their personal wealth. Neither of those options are viable when leading a country as its president.

America in not a business and does not need a CEO with a cheerleader enthusiasm that requires no supporting facts. Surely you, too, have at one time heard the delusional cheers. Your team is down by 40 points with minutes to go and the cheerleaders are enthusiastically shouting cheers of impending victory. It simply doesn’t work that way, and it’s a dangerous delusion to think it does.

In politics, as in life, success is achieved by hard work. In Washington that means working with opponents to compromise on solutions that neither side loves, but in the end gets something done. No great compromises were ever hammered out in Twitter. I would like to think that anyone who embraces the sophomoric slogan of make America Great Again would also realize that their false goal would not be accomplished by Tweets. The reality is they probably do and that is the real problem.