Many surveys have shown that Americans are decidedly unaware of basic civics. As one example, a 2014 survey by the Annenberg Public Policy Center found that only 36% of respondents could name the three branches of the United States government.[1] With that level of knowledge as a foundation, I have come to ignore (mostly) people’s ill-informed statements about the Constitution. The bar is disturbingly low for what the public knows about our government.

However, the bar for presidential candidates should be, and must be, much higher than the general public. It is my expectation that someone running for the highest office in the land should know more than the basics when it comes to how our government works and the Constitution. Statements made this weekend by some of those candidates indicated a profound lack of understanding of the First Amendment. The context of the misstatements was Trump’s cancellation of his campaign rally in Chicago due to protesters.

Using his favorite form of communication, Trump tweeted[2] the following: 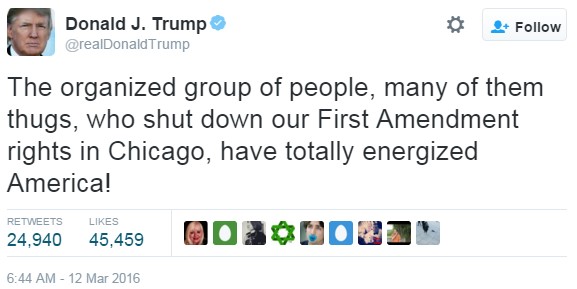 The problem is that his cancellation of his own rally had absolutely nothing to do with the First Amendment which reads:

“Congress shall make no law respecting an establishment of religion, or prohibiting the free exercise thereof; or abridging the freedom of speech, or of the press; or the right of the people peaceably to assemble, and to petition the Government for a redress of grievances.”

To be crystal clear- The First Amendment applies to the government restricting religion or speech, not someone’s speech being curtailed by actions of private individuals. Remember, you can make any political statement at your place of employment you want and will not go to jail. However, should your employer disagree with your statement, he or she is within their rights to fire you on the spot.

Given Trump’s lack of knowledge about our political system I wasn’t terribly surprised by his ignorant statement. However, he was not alone. On ABC’s This week with Gorge Stephanopoulos that aired March 13, other presidential candidate put their ignorance of the Constitution on display. In an interview on the show Senator Ted Cruz stated, “Let’s be clear. First of all, the protestors were in the wrong, when you come up and use violence, you engage in violence, you threaten violence and when you try to shut down and shout down speech that’s not what the first amendment allows. The First Amendment gives every one of us the right to speak but not to disrupt others.” No Ted, you got this one very wrong. This one surprised me – I expected more from a Harvard Law School graduate. Maybe Ted knew what the First Amendment said but wanted to intentionally misinterpret it because it would serve as a campaign rallying cry for his low-information supporters.

Also on Sunday’s show, presidential candidate Marco Rubio was speaking about the protesters at Trumps rally and stated “They don’t have the right to disrupt an event.” That seems strange coming from an original Tea Party candidate. Wasn’t throwing all that tea into the bay a bit disruptive?

Finally on Today’s episode of Morning Joe, Guest Ben Carson ironically talked about the cancellation as an educational opportunity by saying “This is a wonderful opportunity for education in America. It gives Donald trump and other candidates to talk about first amendment rights and why they’re important.” Could he have missed to mark any further?

Maybe the education opportunity is for all the presidential candidates to actually read the Constitution and the Bill of Rights and stop making ridiculous statements that feed the misconceptions of the poorly informed public. But then, maybe the strategy is that the candidates want to electorate to bee ill informed.