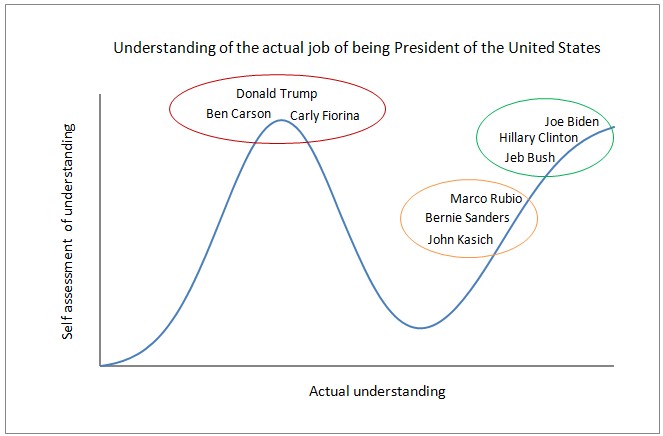 The peculiar nature of the campaign for the 2016 presidential election has provided political pundits an oversupply of fodder for their analyses. A prevailing assessment seems to be that Donald Trump, Ben Carson, and Carly Fiorina are achieving at least transitory success in the polls not because of any great depth of their policy discussions, but because of their outsider standing.

I’m sure that’s true on some level. I tend to think that their success is at least partially due to the fact that voters, especially low-information voters, don’t care to be encumbered by policy discussions, but instead respond favorably to demagoguery and oversimplifications. It’s far less work and besides, policy discussions tend to be analytical while sound bites stimulate an emotional response. At this stage in the presidential race, it seems that emotional preferences are being reflected in the polls rather than an assessment of presidential job suitability.

Have we ever elected a president solely on how qualified they are to execute in the role of president. It’s doubtful. Nevertheless, I thought I’d offer one perspective on where I’d place some of the current candidates on a Dunning-Kruger chart. The title of Justin Kruger’s and David Dunning’s 1999 publication succinctly defines their observation Unskilled and unaware of it: how difficulties in recognizing one’s own incompetence lead to inflated self-assessments.[1] To be sure, this is not a novel observation, Charles Darwin has been quoted as saying, “Ignorance more frequently begets confidence than does knowledge.” I summarized my thoughts on Dunning-Kruger in an August 2013 post, “You probably don’t know what you’re talking about – you only think you do.”[2]

The political manifestation of Dunning-Kruger  is no more evident than in the current race for the president. I have been especially struck by how the outsiders currently at the top of the polls are singularly lacking any experience in government and are devoid of any credible, substantive understanding of policies. Overconfidence may play well in the boardroom or the operating theater, but it is decidedly a dangerous personality trait for the President of the United States. For that reason, I would place Trump, Carson and Fiorina at the very top of the first curve in the Dunning-Kruger graph indicating they have limited knowledge of the true nature of being president, but at the same time project their own omniscience of the job.

At the other end of the curve are those candidates that have far better insight of what the job really entails. If an incumbent were running they would clearly be at the far extreme of knowledge. Since there are no incumbents, I would argue that those having been in Federal government at a high level have an advantage. There is also value in having had a close relative hold the office to have a grounded perspective of how things really work and the realization that the president is not omnipotent as some of the candidates on the first hump of the curve would have us believe. Of all the current candidates, Hillary Clinton and to a lesser extent, Jeb Bush, have the best understanding of the nature of the office. This is important when comparing statements made by them to statements made by the outsiders.

I think this will all settle itself out as the field narrows and voters realize that there’s more to being president than empty slogans. At some point substance matters, and if it doesn’t, then the world may have to learn how to deal with a reality television President of the United States.