I’m not an attorney. I don’t even play one on TV so I probably should not be touching on the legal aspects of the Fourth Amendment to the United States constitution that states:

“A well regulated Militia, being necessary to the security of a free State, the right of the people to keep and bear Arms, shall not be infringed.”

Notwithstanding my lack of jurisprudence credibility, before the Supreme Court decision in Heller, I was holding onto the interpretation that the Second Amendment provided the right to bear firearms onlyas part of a well regulated militia. From a practical perspective, I’m not sure Heller did much other than remove the last remaining limitation on the right to carry a firearm. I say that may not be very significant because the para-military civilian industrial gun complex needed no such validation by the Supreme Court. They have been and are doing just fine.

The epic magnitude of the Newtown tragedy has caused many to turn their attention to firearms. There has been very thoughtful analyses by scholars from many disciplines but there will be nothing new that will be revealed. We have had enough information to act for decades but the efforts at sensible gun control have been etiolated, at best. I will leave it to others to detail to the relative contributions of the gun lobby, the prepper mind set, violence in our streets and violence in our entertainment.

The cause will be determined to be multifaceted but the effect has been that the para-military civilian industrial gun complex has been successful in turning America’s gun industry from firearms for sporting and self defense into a truly military market place. The firearm industry has realized that there is money to be made by succoring the pathology of violence and feeding the paranoia of the anti-government fringe with their military grade, high capacity weapons. 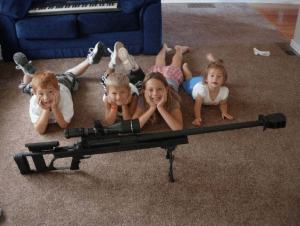 One need only read the report from the Violence Policy Center (VPC), “The Militarization of the U.S. Civilian Firearms Market”, to realize the extent of the problem. Or, one can see the extent of the problem simply by visiting any of the myriad online gun dealers and reviewing their stock of military grade weapons. Personally, I had no idea that for $6,000 I could buy a 50 caliber sniper rifle online and have it shipped to a local “dealer” for pickup. To put this in perspective, peruse the collection of  VPC reports here: http://www.vpc.org/50caliber.htm

We should channel the Newtown massacre anger by recognizing that there has been a seismic shift in how firearm control should be viewed and that the Supreme Court has an opening to redefine gun control that is more in line with common sense. Stare Decisis be damned!

It is incumbent upon all Americans to keep this issue at the forefront of the conversation, effect meaningful change to honor the memory of the Newtown victims.

One thought on “The Second Amendment – Stare Decisis be Damned.”