As can be seen in the graph below, Romney’s base defense budget will increase by $355 billion (55%) from 2013 to 2022. But is that enough to protect the United States from an existential military threat from other nations? A case study my be illustrative.

Since Romney has characterized Russia as “our number one geopolitical foe” maybe he believes that increasing the base defense budget by 55% is required to keep Putin, et al. in check. A conservative might agree, especially one of the resurgent neo-conservatves advising Romney.

Moderates might argue that any existential threat to the U.S. will not come from nation states with functional governments but from amorphous terrorists groups less amenable to containment by aircraft carriers and nuclear submarines.

Is Romney’s budget increase necessary to contain Russia, his number one geopolitical foe, or do we already have sufficient resources to have an incontrovertible and decisive advantage on the field? Since it seems that Americans are often more interested in the football field than the geopolitical filed it may be illustrative to compare the United States and Russia in terms of Xs and Os.

According to the Stockholm International Peace Research Institute (SIPRI) 2012 yearbook, the U.S. spent $711 billion on military expenditures in compared to Russia’s $80.7 billion. Those are big numbers and what appears to be a significant differential but let’s push the football analogy. There are 11 players on a football team so we could calculate the individual salary of the Russian time by dividing $80.7 billion by 11 to get $7.3 billion pr player. Let’s assume that we pay the American players the same salary so dividing $711 billion by $7.3 billion would mean that the U.S. would have 96 players. Since I’ve gone this far down the rabbit hole, we might as well visualize how this differential would appear on a football field. 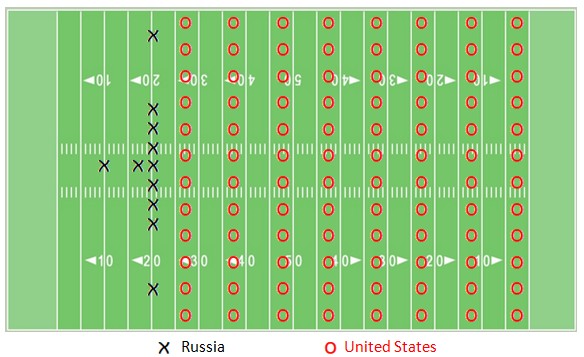 I’m really not that much of a football fan but even I can tell that the likelihood of the Russian team advancing the ball is rather remote. If Romney is elected President and implements his 55% military budget increase we would need to add an additional 52 players to the field – if we could find room for them.

I readily concede this is an absurd example, but so is increasing the military budget by such a ridiculous amount. Some have speculated that Romney isn’t really serious about the radical increase in military spending and have suggested it is because a certain segment of the voting population will respond to saber rattling no matter how absurd it may be. Some have also suggested that Romney has only proposed such a preposterous increase so that he may offer to reduce it as a concession during possible, future negotiations. It is for the former group that I present this football analogy with the hope that it may resonate with them and they will recognize that at some point, enough is enough.