On June 4, 2012 the Pew Research Center released the results of a poll titled: “Partisan Polarization Surges in Bush, Obama Years.[1] “ Not surprisingly ,the poll indicated a widening partisan gap between Republicans and Democrats. There may be many causes for the divergent opinions on value issues such as growth of media-enabled information cocoons exacerbated by social networking and other instant gratification new media.

Regardless of the reason the Pew data is also reflected in the partisan rift in the US Senate as indicated by the growing number of filibusters. The chart below overlays the Pew data with the cloture votes in the Senate [2],[3],[4].  Certainly correlation is not causation but if one were to play the chicken and egg game, which came first – the partisan Senate or the partisan people? I suspect the two are inextricably intertwined. 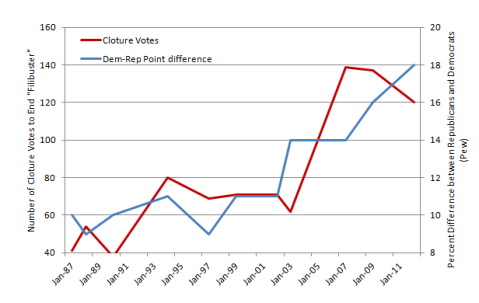 [2] The 2012 cloture data is an extrapolation based on data available through May 2012.